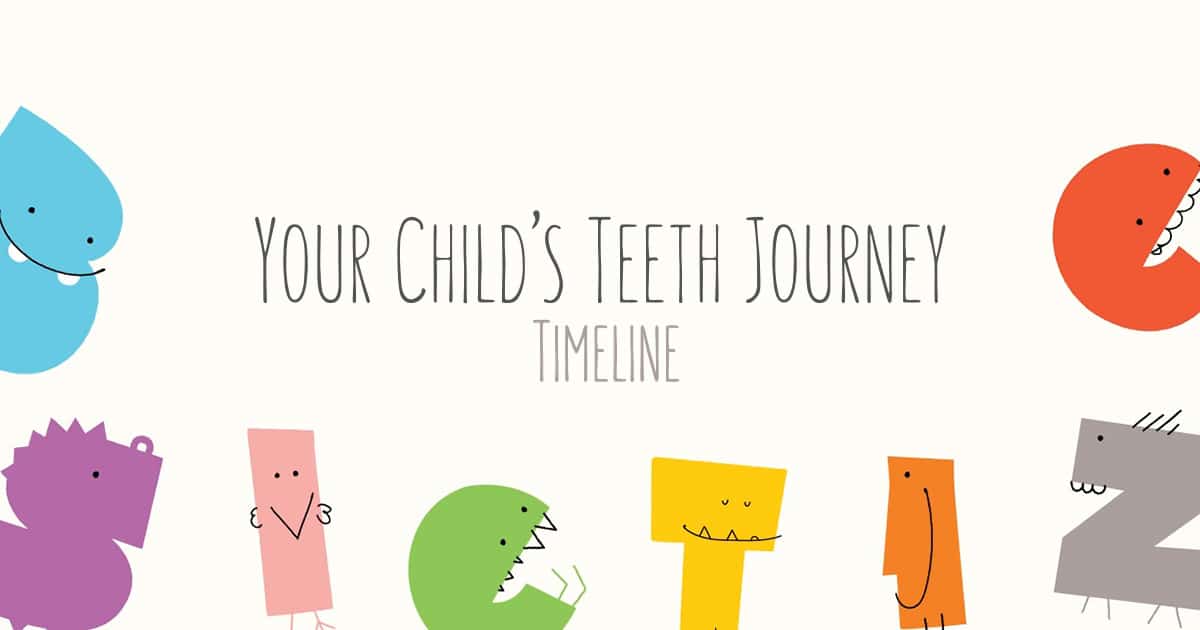 Babies are born with all of their primary teeth below the gum line waiting to make their debut. Once a child’s first tooth comes in, the process of teeth erupting, falling out and erupting once more continues until about the age of 12 or 13 when all of the permanent teeth (aside from the wisdom teeth) are in place. As Brooklyn pediatric dentists, we know parents can get a little stressed about the process and worry whether or not their child’s smile journey is on schedule. All kids are unique and there’s a pretty big range when it comes to the age babies start teething, when kids’ lose teeth and when the permanent teeth come in. The Bitesize gang is here to help with our handy infographic detailing your child’s teeth timeline.

Most kids get their first tooth between six and 10 months of age. If your tiny tot starts later than this, there’s no need to panic. However, the American Academy of Pediatrics suggest parents talk to their pediatric dentist if their child doesn’t have any teeth at 18 months. Which teeth grow in first? While the baby teeth order of eruption can vary slightly, typically the lower central incisors (bottom front teeth) are the first to make an appearance.

The bottom front teeth are most commonly followed by the upper central incisors (top front teeth). Baby teeth tend to erupt in pairs, meaning the tooth on the right will come in around the same time as its partner on the left, usually the bottom teeth first and then the upper teeth next. Between 25 and 33 months of age, the top second molars will join the smile party and your toddler will have a full set of 20 primary teeth.

According to the American Academy of Pediatric Dentistry guidelines, little ones should have their first visit to the dentist six months after their first tooth comes in or no later than their first birthday.

As you can see from this helpful baby tooth loss chart, there’s a range for the age primary teeth start falling out. Generally, most kids lose their first baby tooth between six- and seven-years-old.  However, it can happen when they’re a bit younger or older. Teeth usually fall out in the same order they came in with the bottom front teeth being the first to make their way to the Tooth Fairy followed by the top front teeth.

The rest of the baby teeth will usually fall out between the ages of seven and 12. The second molars are generally the last primary teeth to say goodbye. When a tooth first gets wiggly, it can take a few months to come out. It’s best to let the baby tooth fall out on its own when it’s good and ready to avoid causing any damage.

When do permanent teeth grow in? Between the ages six and seven the first permanent molars commonly erupt. These “six-year molars” aren’t replacing baby teeth and actually come into an empty space. During this timeframe, the lower front teeth (central incisors) also erupt. It varies by kiddo whether they get their molars or their incisors first.

Over the next five years or so, the remaining permanent replacement teeth will erupt, with each one typically coming in right behind the baby tooth that just fell out. You can check out this permanent teeth eruption chart to get a good idea of the timing and order. Usually, the grown-up tooth pushes the baby tooth out as it emerges. However, sometimes, a permanent tooth might be slow to fully erupt. If you don’t see a permanent tooth six months after your child loses their primary tooth, schedule a visit with your pediatric dentist.

Between the ages of 12 and 13, the permanent second molars will erupt. Just like the permanent first molars, these teeth aren’t replacing primary ones, which is why your kiddo will now have 28 teeth instead of 20. Your child’s smile journey is complete unless their wisdom teeth erupt, which doesn’t always happen, in their late teenage or early adult years.

That’s how your child’s smile takes shape! If you have questions or concerns about your little one’s teeth erupting or falling out, schedule a visit at Bitesize Pediatric Dentistry in Williamsburg or Park Slope. Our Brooklyn pediatric dentists will make sure your child’s oral health and development are on track!