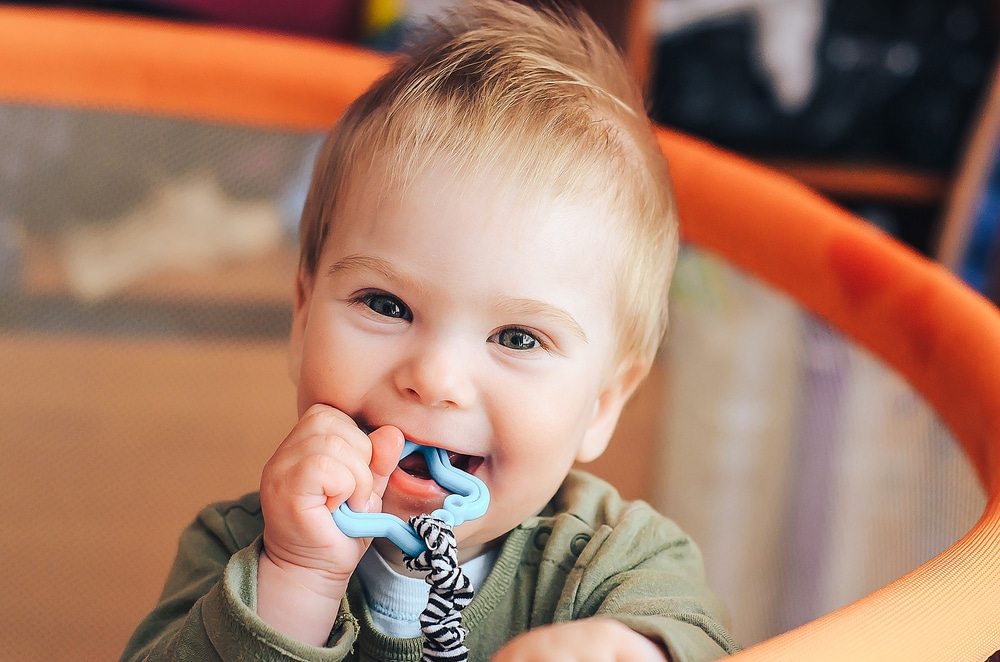 The end result of teething is a beautiful little smile but we know the idea of it can be a little daunting for parents. Plus, there’s mixed information out there about what’s normal during teething and which remedies are safe and effective. Well, we’ve got you covered. As a Brooklyn kids’ dentist, we get a lot of questions about teething here at Bitesize Pediatric Dentistry. We’ve decided to compile the questions we hear most often to help give you some clarity.

When do babies start teething?

The most common teething question we get is when do babies start teething? Just as with all developmental milestones, there is a range. In general, between six and 10 months is when babies start teething. If your tiny tot gets their first tooth outside of that range, that’s okay. However, the American Academy of Pediatrics recommends that parents see a pediatric dentist if the first tooth hasn’t erupted by 18 months. At your baby’s first dental visit, which is recommended by age one, you can also ask about a lack of pearly whites. We’ll examine your child’s mouth and make sure their oral development is on track.

What order do baby teeth come in?

The order can vary slightly depending on the child but baby teeth tend to erupt in a similar pattern in most babies. They come in in pairs with the tooth on the left and its counterpart on the right erupting around the same time. The bottom pair is typically first, followed by the same pair on the top. As for which baby teeth come in first, the majority of infants get their lower central incisors first, which are the bottom front teeth. These little chompers are followed by the upper central incisors, or top front teeth. To see the whole progression, check out this handy baby teething chart.

How many baby teeth do kids have?

When the teething process is complete, your kiddo will have 20 baby teeth.

Can teething cause a fever?

This might come as a surprise but teething does not cause a clinical fever (100.4 degrees Fahrenheit or more). Studies have shown that babies can have a slight rise in body temperature when teething but it’s not a true fever. If a baby has a real fever, it’s likely from an infection and not erupting teeth.

Can teething cause a rash?

Teething can indirectly cause a rash. A teething rash is actually from your baby’s drool, which can irritate the sensitive skin on their face or their neck and chest if it drips down. When the teeth come in, especially the early teeth, little ones produce more saliva. To tame a teething rash, try to keep the area clean and dry but avoid wiping too frequently or overzealously since this can make it worse. Talk with your pediatrician if keeping it dry doesn’t do the trick. They may recommend using an ointment to act as a physical barrier against the moisture just like you would for diaper rash.

How do you know when a baby is teething?

As for how to tell if baby is teething, the most common baby teething symptoms are drooling, irritability and gum irritation. There can be more pronounced symptoms, including waking up in the night, a teething rash and decreased appetite but these are usually very brief. Teething has become sort of a scapegoat for a whole bunch of baby behaviors and symptoms, which may in fact, just be related to the developmental stage your baby is in or an illness. According to several studies, teething symptoms tend to start a day or two before the tooth comes in and stop a day after the tooth erupts. If your baby has a fever, diarrhea or doesn’t sleep through the night for weeks, it’s not likely to be related to teething and it would be a good idea to chat with their doctor.

How can I soothe a teething baby?

Here are some tried and true tips for soothing a teething baby:

Which teething remedies should I avoid?

There are a few teething remedies to avoid or at least use with caution:

How long do babies teeth?

Another common question is how long do babies teeth? Teething can last up to three years since kids get their final primary teeth, the upper second molars, between the ages of 25 months and 33 months. We know, we know, three years sounds like a lot but hear us out. Not every tooth is going to elicit a dramatic response. Research suggests teething symptoms peak when the front teeth come in between six months and 16 months and then decrease as babies get older. So, believe us, you won’t have to deal with three straight years of sleepless nights on account of teeth erupting. In fact, many times you won’t even know your child is teething until you see a new tooth breaking through.

Thankfully, for the most part, teething symptoms tend to be mild and there are plenty of effective teething remedies that will give your baby relief. If you have more questions about teething or you’re looking for a Park Slope pediatric dentist, book an appointment at Bitesize Pediatric Dentistry today!